It’s a recession but what does that mean for the Exeter property market?

It's a recession but what does that mean for the Exeter property market?

The country has been in lockdown for four months – Of course the economy is “in recession”! But not only is a “V” shaped recovery a very real possibility,  even if it doesn’t bounce back quite so quickly, it doesn’t mean that we should expect  a house price crash here in Exeter.

The jump in UK housing market activity since lockdown is a welcome but surprising development, given the sharp fall in GDP. We take a look at three driving forces behind this resilience, as well as three key headwinds we think could still challenge the market later in the year

The UK economy may have experienced the biggest fall in GDP of modern times – but you wouldn’t think that, looking at the property market here in Exeter.

According to Rightmove, buyer enquiries have surged since estate agency restrictions were eased back in mid-May. But with unemployment already on the rise, some are questioning if the housing market ‘mini-boom’ can continue, or are we heading for a price correction, as  some forecasters are predicting?

Whilst we believe there is likely to be some cooling in activity later in the year, we are expecting the West country market – and particularly the market here in Exeter to be resilient to any falls that might beset other parts of the UK.

But before we get out the crystal ball, let’s take a look at what we see as  some key factors

What happens to house prices in a recession?

Well, it depends on a whole host of factors – not the least of which are the cause of the recession, the underlying market conditions before it started and  where you live in the UK.

Not all recessions are the same. The last “Great Depression” in 2008/2009 came about as a result of irresponsible financial deregulation (or, some would say, downright greed and ineptitude!). Lenders relaxed their strict lending criteria to extend credit to people who took out loans they couldn’t afford. This drove up house prices over a sustained period, to unstainable levels. The US housing market bubble burst and the knock-on effect of the global banking and stock market “melt down” had an immediate impact on the UK property market – The rapid “gains” in house prices many homeowners had “enjoyed” in the preceding years were, for many, wiped out in the following eighteen months.  Disproportionately, higher income groups – those with big mortgages they couldn’t afford –  were affected the most. The preceding property market conditions were overheated, over valued and as a result house prices in some parts of the UK plummeted. But not at all in some West Country “hot-spots” and they didn’t fall so much in many other  favoured addresses in the region.

Without question, this recession is very different to that in 2008. As we all know, this time it’s caused by a global pandemic, Governments around the world made the decision to shut down large sections of the economy and were able to put measures in place to protect them to some extent. The crisis seems to be hitting very much the lower income groups; the vulnerable workers, young and less skilled –  not necessarily the main “drivers” in what will happen to property prices.

The preceding market conditions were healthy but not overheated, with sustained price stability and steady supply and demand. Whilst, according to Nationwide, House prices fell by 1.7 per cent from April to May (hardly surprising in the first two months of lockdown!) by July, Halifax reported a “mini boom” in the market had pushed average property values up by 1.6%. But both lenders only represent a fraction of overall UK market,  base their figures on mortgages approved, neither include cash sales (which account for 30%-40% of sales) and Nationwide don’t take in to account any Buy-to-let lending – a sector that looks set to grow .

In Exeter, as soon as lockdown restrictions were eased the housing market rebounded,  not just quickly, but instantly. Indeed, since lockdown was announced, our own agency has agreed, exchanged or completed over £100 Million worth of property sales in the local Exeter area alone. Whereas after 2008 not only were prices in addresses such as Topsham, St Leonards and many Devon “hot spots” hardly affected but now current demand is being further fuelled by out-of-area buyers looking for a complete lifestyle change. Because we haven’t had the same rapid house price growth we saw on the lead up to the 2008 crash, there’s no reason to expect any dramatic falls in house prices this time around.

Interestingly, of the eleven UK regions that make up the Rightmove index , The South West is the only region outside of London and the South East which has yet to see a record high for new seller asking prices – another reason why we see demand for property here in Exeter is likely to increase. 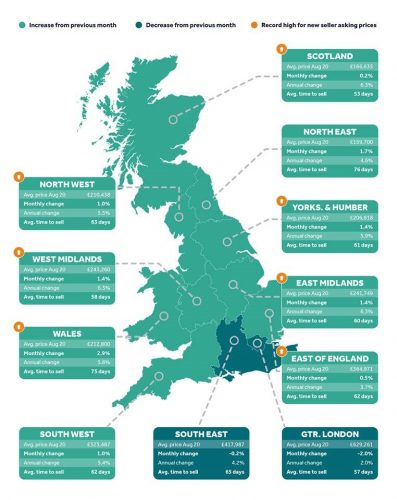 Of course, we cannot be oblivious to the wider economic outlook but here in Exeter and close by, we are predicting a continued steady increase in transaction numbers and modest house price growth for the remainder of the year and we are very optimistic about the prospects for both in 2021.

We are currently experiencing technical problems with our phone system which may cause issues with incoming calls. If you experience any problems ringing us, please email exeter@wilkinsongrant.co.uk We are working hard to rectify this problem and apologise for any inconvenience.